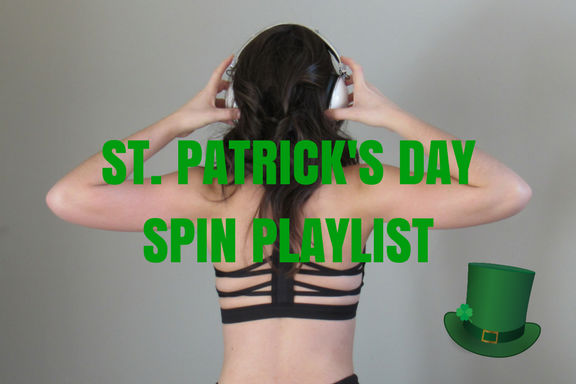 It’s fun to make a themed spinning music playlist and routine for St. Patrick’s Day, since there’s a lot more room for creativity and out-of-the-box thinking. When it comes to Christmas and Halloween, you’re often stuck playing the chart topping hits, because that’s what participants expect. For St. Patrick’s Day, you can throw in a bunch of quirky songs loosely related to the holiday and get away with it.

I’m a big fan of tying together songs around a very broad theme, because then I can play the songs I want, and my participants get a kick out of the wackiness. This year, I’m adding a handful of Irish artists and songs about luck, gold and the color green to my St. Patrick’s Day spinning playlist and routine. Because, why not?

If you’re putting together a spin playlist of your own, I encourage you to have fun with it! If you think a song will be awesome for spinning, but doesn’t fit perfectly into a theme, that’s okay.

Since it is a St. Patrick’s Day spin playlist, the series is three songs long and the resistance on the bike mimics the shape of the rainbow. So, the resistance will get heavier for the first two songs and then dial down for the last song.

Here’s the series — do it three times through.